Freiburg vs Leipzig: prediction for the DFB-Pokal match

Freiburg vs Leipzig. Prediction and Betting Tips for DFB-Pokal (May 21, 2022) 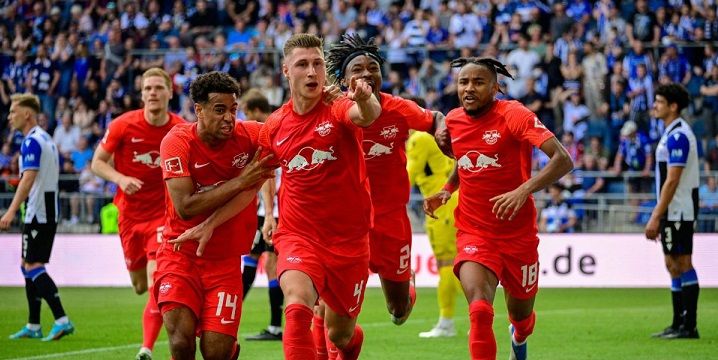 Freiburg can't beat Leipzig for five consecutive matches, but will the Bulls get another victory on May 21? The answer is in our prediction.

Freiburg enjoyed a successful season - Christian Streich's team fought for the Champions League spot to the last day of Bundesliga campaign. The Griffins were around the Top-4 for the whole season, but were unable to keep that spot in the end, finishing the season at the 6th position.

Freiburg suffered from two consecutive defeats to Union (1:4) and Bayer (1:2) at the end of the season. On their way to the final the Griffins beat Wurzburger Kickers, Osnabruck, Hoffenheim, Bochum and Hamburger.

Leipzig started the season with an overhauled squad, almost all of team's leaders left the club. Jesse Marsch was unable to get the team going, club lost too many points in the first half of the season and dropped to the lower half of the standings. Team also failed to achieve a positive result in the Champions League group stage.

But after the arrival of Domenico Tedesco team started to perform much better and successfully took the Champions League spot. The Bulls are finishing the season as the 4th team in the league, beating Union by one point. The Bulls are five points adrift from the 3rd-placed Bayer.

Two of seven latest matches of Freiburg finished with that score

Freiburg to score in the second half
2.03

This bet won in four latest matches of Freiburg

Leipzig to score in the second half
1.65

Three latest matches of Leipzig went by that scenario

Freiburg and Leipzig were fighting each other for the Champions League spot until the final weeks of the season, but the Bulls eventually took the 4th position. Tedesco's team is approaching the DFB-Pokal final in a great form and without any selection problems and we can't say the same about Freiburg. The Griffins suffered two consecutive defeats in important matches.

Leipzig have an advantage on class, team has a chance to claim the first trophy in club's history, so we feel that the Bulls have a slight edge in this final.

Our prediction - Leipzig to win the match

Leipzig are clear favourites in the final match - the Bulls are in a fantastic form, they have an advantage on class and they are more successful in head-to-head matches. However, we are not expecting a blowout in the final, both teams will try to put up a cautious performance on defense, the Bulls should be able to claim the trophy in the regular time though.

Our second bet is on Leipzig to win by one goal

Prediction: Leipzig to win by one goal